2. Plane mechanics can also be said to be a psychological state in which a person exerts a certain psychological effect between various objects and achieves a certain connection. For example, two points in geometry form a line and three points form a visual mentality (Figure 4). ). 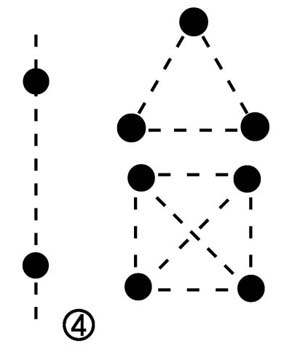 This state of mind not only reinforces the ambiguity of each unit image, but also makes them closely related to each other. It includes dynamics and direction indication, and participates in graphic design with the same value as the object image. It becomes the key link between objects in the design of the graphic, and at the same time it indicates the appearance of the field in the plane.

3. The object image is the most direct bearer of the field setting. Its ambiguity not only bears the figure and the meaning itself, but also the organic intersection between the splicing combination and the plane mechanics and space makes the design of the field become new from the abstract realization of the concrete and practical. Value and body.

Therefore, when operating graphics, whether it is abstract symbols or figurative photographs, we are free to arrange and process its colors and forms adapted to the field consciousness. Objects in different spaces and different historical spaces can be suitable. The design mix for the field. In particular, the use of computer science and technology in graphic design, object images in graphics can be compressed, elongated, squeezed, distorted, distorted, discolored, etc., forming a form that is impossible in real society. It is different from humans. The eye grasps the object image's distance, color, size, and the traditional spatial concept of instant images. According to Bauhaus's design philosophy, "the purpose of the design is man, not product". For the purpose of attracting attention, how the object image is curious can be designed, resulting in visual diversity and vitality, giving people a new visual stimuli.

In addition to the cultural significance of logical thinking, text should also be an object image as part of the graphic design under field consciousness. It can also set a text directly as a field and deduce the figure again, such as an English letter: "O" can be It is magnified into an elliptical field. The space defined in the "O" letter can shape another object or space. It can be real or fictitious. People can recognize the existence of the "O" letter from this figure. It also triggered a deep associative visual thinking space with profound meaning.

In modern design, texts are born with decorative patterns and their groups are more patterned. Many designers like the wonderful character of writing in all areas of graphic design. Japanese contemporary design artists have used a deeper use of words and deepened them to form a powerful group that dominates the design flow of the Japanese generation and has a profound influence on the graphic design of our country.

The three elements of the field described above are interrelated and mutually interacting, and they act objectively on people's inner responses, such as reasoning, judgment, experience, analysis, beauty, and ugliness, so that the state of mind reaches a certain state: it is free to liberate. Or is it awkward, painful, or pleasant or satisfying. The role and state of the heart, Zhuangzi called the spirit. Obviously, the different settings of the field directly affect the spiritual theme of the graph and affect the formation of the perception concept.
Take the cover design of â€œChinese Early Childhood Literacyâ€ as an example (this is the authorâ€™s first computer design work 9 years ago, although not very good, but it can explain some problems, huh, huh??) The various objects on the cover are not isolated Patchwork, but because it is set up as a combination of field. Its composition can be interpreted as the zigzag field, the elliptical field and the color field, the abstraction of the rhythm field. In order to strengthen the highlighting of the title word, it is intended to increase the processing of the ellipse in its background, and at the same time stimulate the obstruction of the ellipse and the elliptical object image, and cut into the main content outside the ellipse, can be expanded in the unlimited Freedom in space (Figure 5, Figure 6).